For the latest news from the Principality of Seborga
please visit the new edition of
"La Gazzetta di Seborga"
at this new address:
www.gazzettadiseborga.com
Posted by SeborgaPress

OFFICIALLY OPENED BY HRH PRINCE MARCELLO I, THE NEW CONSULATE IN MUNICH 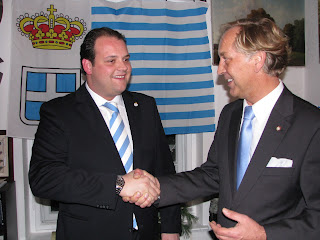 The list of our diplomatic posts overseas is growing with the recent official opening of the Honorary Consulate in Munich (Germany), on December 17th. 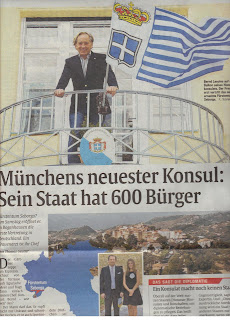 The opening of this new Consulate is part of a plan introduced by our Minister for Foreign Affairs, Mrs. Nina Menegatto, to create a modern consular network, actively involved in promoting the image and the presence of the Principality around the world.
About seventy invited guests joined the official opening in the quarters of the new Consulate in Munich and invited by the new Honorary Consul, Dr. Bernd Lesoine (in the photo with Prince Marcello I).
Guests of honor were H.R.H. Prince Marcello I of Seborga and his wife and Minister for Foreign Affairs, Mrs. Menegatto.
Among the guests were prominent people of business, economy, science, sports, entertainment and media: the former CEO BMW Gunter Lorenz; the lead-guitarist of the Scorpion, Matthias Jabs; the renown German sport commentator, Marcel Reif; the CEO of Worldguide, Dr Andreas Lindner; the TV producer and author, Christian Seidel; the Consul of Seborga in Luxembourg, Baron Arnotte and many other distinguished guests.
The local newspaper “Abendzeitung” published a whole page about the Principality on the opening day.
The renown international “Sueddeutsche Zeitung” also reported the event with an article about Seborga. The local TV stations also broadcasted features about the official opening.(SeborgaPress) 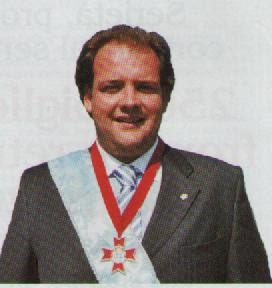 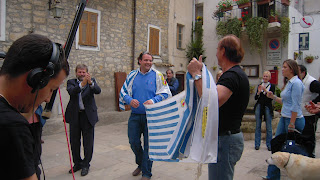 The Principality of Seborga has a new and young Prince. The Seborgans have elected their representative for the next seven years: the 31 years old building contractor, Marcello Menegatto (in the photo).
Menegatto collected 89 votes against his rival Pepi Morgia (67 votes).
These are the official results of the elections held last weekend in Seborga:
Number of eligible voters: 220
Total number of voters: 156
Total votes for Marcello Menegatto: 89
Total votes for Gian Luigi (Pepi) Morgia: 67
Total votes by correspodence: 13
Total of invalid votes: 3 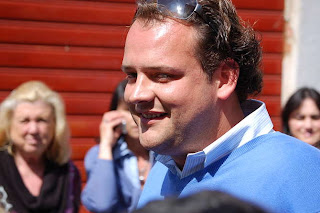 Seborgans are celebrating the newly elected Prince and looking forward to work with him for the future of the Principality.
Soon after the results of the elections, the new Prince thanked all the Seborgans and said: "I will create new infrastructures and new jobs for our citizens. I will reorganize the governement, our general laws and our old documents. Regarding our independence, I will continue the fight (started by Giorgio I). My dream is to se Seborga becoming a real Principality".

Messages of congratulations to the new elected Prince from our readers: 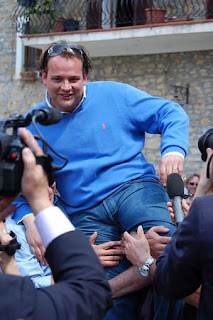 Greetings and Felicitations to All and Whom the Presents Come;

May we extend congratulations to His Highness on his election.

This is a momentous occasion for the Principality of Seborga.

The peaceful transfer of authority today within the Sovereign Principality of Seborga reaffirms for us the continuity of Seborga's heroic tradition and reaffirms Our faith that a small Nation/State can exist in today's world.

We are confident that His Highness, like His Tremendousness Giorgio Carbone, will rise to meet any challenges with wisdom. We wish His Highness good health and strength to carry out his duties with courage and conviction.

We join hands with Seborga in friendship as we move forward in our search peace, prosperity and equity for all.

The Councils of the Prior and of the Crown have set for Saturday 24 and Sunday, April 25 the dates for the elections of the new Prince of Seborga, the successor of George I.
Only Seborgans with a valid identity card or passport can vote at the elections. The polling station will be open Saturday, April 24, from 15:00 to 19:00 and Sunday, April 25, from 09:00 to 13:00.
The elections will be held by open ballot, as prescribed by the General Statutes. Seborgans living abroad can also vote by sending a telegram to the Minister of the Crown, Franco Di Bisceglie. Sunday afternoon, shortly after the close of the polling station, we will know the name of the new Prince, elected by the will of the people of Seborga.
On Friday 23, at 18:00, in the main square (Piazza della Libertà) the two official candidates: Marcello Menegatto (left in the photo) and Gian Luigi Morgia (right in the photo) will present themself to the Seborgans for a final call, before the elections.
Posted by SeborgaPress

Elections in Seborga: nominated two candidates for the coming elections

The Council of the Priors and the Council of the Crown have finally selected two candidates for the elections of the new Prince of Seborga.
According to the Seborgan Codes of Law (“Statuti Generali”), the Councils voted for two of the five runners for the elections: Marcello Menegatto and Gian Luigi Morgia. Both are well known Seborgans residents and respected by the citizens.
The two official candidates will have now until the 18th April to accept the nominee and each submit the names of four reliable ministers that they wish to appoint.
It is also expected that on the same day the Councils will announce the date for the coming elections.
(SeborgaPress)
Posted by SeborgaPress

Here are some messages of condolences that we have received from our readers (If you wish, you can send us your message at this address: seborgapress@gmail.com).
+++
The Sunday New York Times
carried the sad news of the death of one of the great statesmen of this brief century,
Prince Giorgio of Seborga.
During his lengthy, elected tenure, Prince Giorgio set an example
of leadership that others should emulate.
He accepted no salary, he never invaded another country, never taxed his subjects,
and, according to the Times ”He took to the throne with panache, wearing sash,
sword and large rosette medallions as he held court at the Bianca Azurra bar.”
What other prince, prime minister, president, pope or potentate,
living or dead, has ever been described with such dignity.
Here in Spokane, Washington (sometimes referred to as Spokanistan
because of the rutted and pot-holed roads, falling into disrepair
thanks to our nation’s empire building in various Middle Eastern countries)
patrons of the Blue Spark bar will gather tonight
to drink Mimosas in fond memory of His Tremendousness.
The prince may be gone, but long live the principality.
Long Live Seborga!

With deep grief we have apprehended a sad message about death of
His Tremendousness Giorgio I, the Prince of the Principality of Seborga.
Death His Highness Prince Giorgio I is huge loss for Principality of Seborga,
citizens of the Principality Seborga, the European Monarchy,
but also to all people who known and respected His Tremendousness Giorgio I.
It pains us to have to say it. Has left the world the person
who has made many kind of chivalrous and illustrious deeds for the World of Nobles,
New Small State, New and Old Monarchy, The cause of Peace - it is his life-work.
He was the careful person, the close friend and true comrade,
the fine manager and the wise monarch.
The heart hotly loving the God, the citizens and people close to Him, has stopped.
Have stopped his heart, but undying bright light of its heart,
will always shine to us road to the future.
This light will remind us of His kind affairs for the blessing of people living on this planet. Nowadays its Soul stays before the God.
We shall pray, that Lord has accepted His Tremendousness Giorgio I under the wing
and has protected from all hardship. L
et memory of this remarkable person for ever remains in our hearts.
Amen.
HRH Grand Duke of Pinsk, Eugene I, (Eugene De Rass)
+++
Your excellencies,
I am saddened to hear of the passing of Prince Giorgio
and pass my condolences onto his family and his nation.
There is nothing I can say that will soften the pain of his absence,
but know that he will live forever in the pages of history.
He was an inspiration to me and to many others like me.
May he rest in peace.
I have decreed that Nov. 25th become a national holiday within Vikesland in his honor.
It will be known as Prince Giorgio day from henceforth.
My deepest sympathies of mine and my nations goes out to you.
Giorgio we shall miss you.
Prince Christopher I
Principality of Vikesland


My family and I want to express our deep sorrow
I hear the News of the passing of Prince Giorgio I
he is been Image and Legend to the people of Principality of Seboga,
his charm and beauty of his City and his belowed people will be always in our memory, Legend live Forever,
Your Sincerely

My family and I want to express our deep sorrow
at the news of the passing of Prince Giorgio 1er Carbon on November 25, 2009.
We liked him and this man gave his life and soul even his money
to give a beautiful Image to Seborga to the whole world
and showed great courage and dignity
in his fight against a deadly disease during more than 2 years.
We should respect his memory and we should admire him
for his vision and generosity.
Long Life to the Principality and her dear citizens,
and we hope they preserved the charm and beauty of their city
and they avoid it fells in dirty hands or people with a wrong and devious agenda,
Yours sincerely,